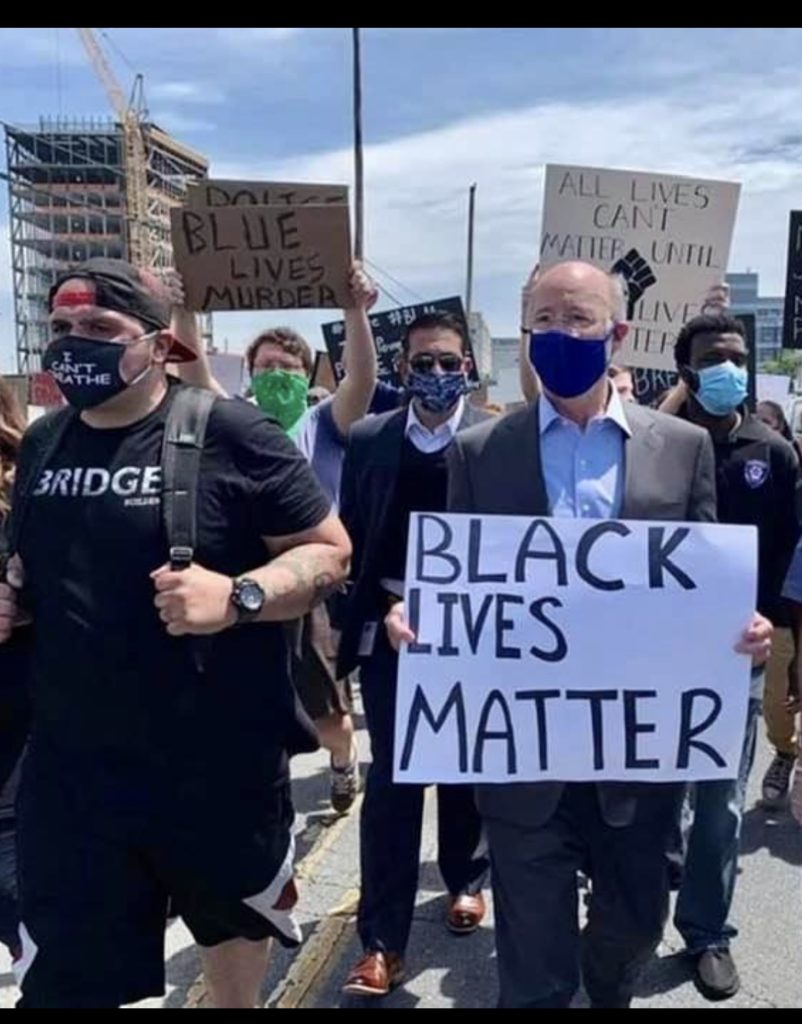 The focus of our Commonwealth, her communities, and even our nation has quickly shifted from the COVID-19 pandemic to racial injustice protests, riots, and calls for police reforms in response to the death of George Floyd by a police officer in Minneapolis, Minnesota.

The death of George Floyd was not simply wrong, it was murder. And private citizens weren’t the only ones sickened by what they saw. I am sure that every police officer in America who watched the video of that officer’s actions – and the actions of his fellow officers – was appalled. As former law enforcement myself, I was appalled. It was very difficult for me to watch. What is also hard for me to watch, though, is the resulting narrative, especially that coming from our Governor, whose sole focus has been on perpetuating the myth that police brutality is dangerously widespread and requires nationwide police reform. Our Governor has decided to judge the over 40,000 active and retired law enforcement officers in our Commonwealth, the overwhelming majority who are upstanding and caring wardens of our safety, by the horrific actions of a few bad cops in Minneapolis. This, by the way, despite the fact that nationwide statistics do not support the presence of widespread racial bias within our criminal justice system.

I recognize that George Floyd was not the first black man to die at the hands of a white police officer. I understand that the aftermath of this incident has been sparked by years of anger and frustration in the black community. But sweeping generalizations and stereotypes about racism and police profiling do our law enforcement community, and the public, a huge disservice. For ALL officers to be vilified – regardless of how well they do their jobs; regardless of how they treat the people they interact with on a daily basis; and regardless of the good they have done and the lives they have saved – is atrocious and ridiculous. For a police uniform to be made to be the equivalent of the stereotyped “hoodie” – if you wear one, you are bad, you are not to be trusted, you are not to be respected, and your life does not matter – is not justice for George Floyd.

Is that really the mindset we are going to perpetuate during this time of discourse, a time which has the potential for actually effectuating change if approached by all parties with an open mind and a willingness to listen? I sincerely hope not.

Unfortunately, I am listening, and what I have heard from Governor Wolf – who is already on shaky ground with many of us for his tyrannical disregard for the constitutionally established balance of power throughout his handling of the COVID-19 pandemic – is that the police force, in general and unequivocally, is the problem.

On June 3, 2020, Governor Wolf joined a Black Lives Matter rally on the Capitol steps – a gathering of significantly more than 25 people in Dauphin County, which is still under Wolf’s yellow phase of reopening, by the way. At that rally, a protester standing next to the Governor held high a sign that stated, “Blue Lives Murder.”  Read it again – Blue Lives Murder.

Who provides protection services for Governor Wolf and his family? Pennsylvania State Troopers. Troopers serve in many capacities on his security detail, including, apparently, being by his side at rallies where people hold derogatory signs stereotyping all officers because of the bad actions of a few. The trooper pictured in the photograph at the rally was on the Governor’s detail, and I would bet it was inflaming every fiber of his being. But his professionalism, training, and sworn oath to protect allowed him to disregard his feelings about the Governor’s political statement and do his job. After the protest, Governor Wolf didn’t think twice about immediately entering his taxpayer-furnished SUV and being safely whisked away by the troopers sworn to protect him.

As a 23-year veteran of the US Marshals Service, I served for many years as Commander of the Fugitive Task Force. I never once witnessed racism by fellow officers, black or white, during my entire career. My assignments took me to many parts of the country, and in the back alleys and inner cities of Philadelphia, New York, Miami, and Los Angeles, where a vehicle in which I was riding was shot at during the Rodney King riots. Those riots saw 63 people killed and over 2,000 more injured. I have experienced it and seen it all.

And now we are seeing another death count rise because peaceful protests have turned to unlawful rioting, making it appear as if all black lives don’t matter after all. If they did, we would not be seeing the black lives lost in city streets across the country during the violence – black business owners, black police officers, and even black civilians in the wrong place at the wrong time. Do those lives matter?  I would certainly hope we would unanimously agree that they do. But where’s the outrage?

Looting of businesses (some of them, businesses of black entrepreneurs already devastated by COVID-19 shutdowns), the trampling of fellow human beings, and the killing of police officers is not solving whatever systemic problems rioters aim to solve. In fact, it is completely counterproductive to their cause.

And how does the Governor react to the mayhem and murder? By pointing the finger at his state’s police officers, our brave men and women who wear blue and who place their very lives on the line every day. And then, marching with those who would carry signs calling our peace officers murderers. Finally, to add insult to injury, one day after his participation in what could have been interpreted as an anti-police rally, Governor Wolf publicly proposed sweeping reforms that amount to little more than political grandstanding at the taxpayer’s and the law enforcement community’s expense. Among his proposals are the creation of an additional Deputy Inspector General to investigate police misconduct; a requirement for all police departments to develop citizen advisory committees; and new training mandates requiring additional sensitivity training. All of this, when statistically there is absolutely no evidence to justify the need for any of it.

Once again, the supposed leader of this Commonwealth is unilaterally making decisions without any input from those affected by those decisions. And the Pennsylvania State Troopers Association and the Fraternal Order of Police have issued responses to this effect. Our police officers certainly deserve some say in any proposed remedies. Unless, of course, Governor Wolf actually believes that our law enforcement community is so devoid of professionalism and integrity as to not warrant being a part of the discussion.

Governor Wolf, enough is enough. If you want to solve Pennsylvania’s problems – from COVID-19 to racial injustice and everything in between – open your eyes to all sides of the issues and start working with the elected officials that the people of Pennsylvania chose to represent them in Harrisburg.  If you aren’t capable of showing the Commonwealth what unity looks like, then it is time for you to resign and allow our state government to resume the work for all people of Pennsylvania.